So, remember when I said that I was FINALLY about to book my skydiving ticket? Update: I DID NOT DO THAT. I have been looking forward to jumping out of a plane over the ocean since I landed in Sydney, but that’s not something that I am even relatively interested in anymore. Apparently, there was an unbelievably sad, freak accident at Sydney Skydive the weekend prior to the one that I was planning to jump. Unfortunately, one of the parachutes didn’t pull and the two skydivers attached tragically lost their lives. So, due to the circumstances, I thought it was probably best to do something a little less extreme this weekend. So, I got a tattoo! Joking. I didn’t do that, but I did do some other fun things!

This week was full of surprising twists and turns, some bad (like real bad) and some good. I can definitely say that the week encompassed some totally new experiences, if nothing else! I went kayaking, snorkelling, and hiking (via ECOTREASURES), attended my first AFL game (GO SWANS!!), visited the observation deck at the Sydney Tower Eye, went to the Sydney Aquarium and Madame Tussauds, shopped at the local markets, and attended an amazing barbecue hosted by an extremely lovely local Sydney couple. Oh, and I had some lamingtons and gelato that were off the charts! SO GOOD!

So, one of the best things that I did this weekend was visiting the tallest building in Sydney. Now, I’m pretty terrified of heights (and elevators), so this was a big deal for me. I’m so glad that I did it though because it was extraordinary! The view from the observation deck made the Sydney Harbour Bridge  and the Opera House look like children’s toys, which is slightly terrifying, but also reallllly cool.  The only bad part of this whole experience was the fact that my ears were hurting while we were in the elevator on the way up. This is probably because they were not happy about the altitude change….and I haven’t been very kind to them lately. I went way up to fly to Cairns, way down to scuba dive, and then way up again to fly back to SYD, and then up again into the tower. Sorry eardrums!! But, the minor headache was more than worth it for the 360 degree view of my favourite city in the world!

Being a kinesiology student, I have a very strong love for all things involving sport…but I especially like football. I mean, I REALLY like football. The way I see it, there are four seasons: Spring, Summer, Football Season, and Winter. So, when I heard about an opportunity to go watch the mighty Sydney Swans play St. Kilda, I jumped at the opportunity. Now, here comes the best part! The tickets were FREE!! My roommate’s boss contacted one of his buddies to set the whole thing up and we ended up with 3 tickets to the best event in town. It was glorious.

I was very interested to see how AFL differed from the NFL and college football in America. Here’s some of the things that I found the most interesting:

I LOVED THIS GAME (once I figured out what was going on, that is). Here’s a quick summary of what I think I know: To score a goal, the ball has to be kicked in-between 1 of 3 open spaces (that look similar to a field goal). There are 4 poles that look like this: 1II1…I know that’s not super helpful so I’ll try to explain! haha The two outer poles are much smaller than the two middle poles. If the ball is punted through the section between the two tall poles, the team gets 6 points; but, if the ball is punted through the gap between the small outer pole and a tall inner pole, the team will receive 1 point. The players are allowed to tackle each other and a lot of them had some serious attitudes…which made the game even more entertaining! Needless to say, I will definitely be attending another game before heading home in August.

Next week, I’m going to Melbourne and I’m beyond excited because we may take a trip down the Great Ocean Road or to Phillip Island to see some penguins! We’ve also heard that the city has loads of good food and shopping! If you know me, you KNOW I like my food (and I may like to shop just a little). That’s a lie, I have absolutely no will power and buy everything that I think I may potentially need! Sorry, mom! haha  It’s going to be so much fun, I just have to remember to pack my stretchy pants 😉 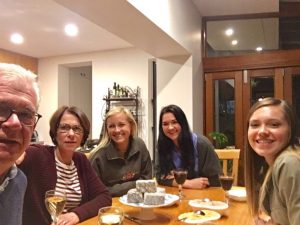 Barbecue with the sweetest people around! (I’m laughing because the amount of food I ate was just outrageous lol kind of impressive though?) 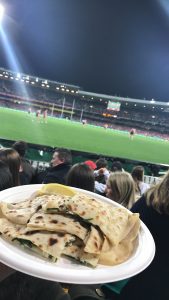 Chowin’ down at the Sydney Swans AFL game! 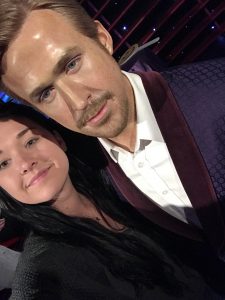