My fifth week in Australia was so much fun! I went on a tour with ECOTREASURES almost every day and then flew to Melbourne over the weekend for some more adventuring! I assisted in a beach clean with a group of incredibly pleasant, friendly, and contagiously happy Japanese students, hiked the Blue Mountains (again ;)) in some crazy wind, went snorkelling at Shelly Beach three times, and then headed to Melbourne for even more fun with one of my best mates!

As I said, the tours this week were absolutely phenomenal. The tour that I went on from Manly Beach (where I live…YAY HOME!!) to Collins Beach for a beach clean (where the group collected 11kgs (25 lbs) of trash) was one of my favourite tours thus far because of the groups attitude. They were all so eager to learn about the environment while exploring and had a smile on their faces all day long! They also taught me how to say “My name is Kaycee” in Japanese and had a field day with it because of how it sounded with my Texan accent. haha But, I eventually got it down(kind of) and can now say that phrase in 6 different languages! Watishino namae waa Kaycee dosu!

Another tour that I really enjoyed this week was the private tour, with a Dutch family, to the Blue Mountain National State Park. The view from the mountains never gets old, it always seems just as incredible in it’s vastness and beauty as the first time I saw it. The views normally blow me away, but the wind quite literally almost did the same on Tuesday. The wind was blowing at 80km/hr (50mph) which was really mild scary, but allowed us to see some pretty incredible things through our watery eyes. Wentworth Falls was literally blowing UPWARD and creating a beautiful rainbow in the process. What do you even begin to call an upside down waterfall? A water-fly? Water-up? I don’t know, but regardless of what you call it, it was spectacular! Oh, and I learned how to say mountain walking in Dutch! Mountain=berg-, (which you say in a way that sounds like your clearing your throat) and Walking=wandelen (much, much, much, MUCH easier to pronounce).

So, after a pretty great week, I headed to Melbourne. I went to the Victoria Markets (and bought an absurd amount of souvenirs…I mean it, I actually looked like a koala smuggler carrying around a bag of 12 stuffed koala bears haha), had some AMAZING coffee, visited the Royal Botanical Gardens, rode the tram, ate out in Little Italy, went to the Lindt Chocolate Cafe, saw the famous Hosier Lane graffiti, and hopped on a tour bus to see as much of the city as possible! The city was filled with trendy, hipster, unique places and a crazy amount of coffee shops and bakeries! Let me tell you, the coffee was incredible!!! Melburnians are not lying when they say that they have the best coffee in the world! I applaud you for your coffee culture, Melbourne! My taste buds are in debt to you! D-E-L-I-C-I-O-U-S.  And, to end the superb week, my flight back to Sydney was beyond beautiful. There were clouds everywhere and…you know what, I don’t think that I can explain it well enough to do it any justice, so I’ll just show you what I mean. Keep scrolling and you’ll see! 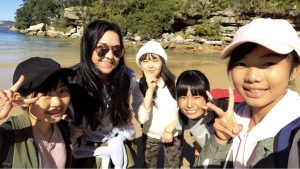 The sweetest girls from Japan during the beach clean! I love my job heaps! 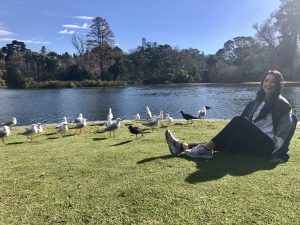 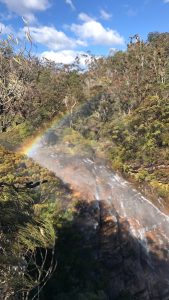 Water-fly or whatever! So stunning 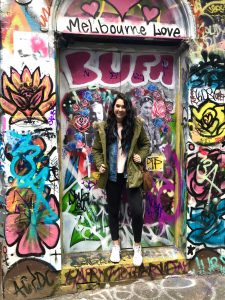 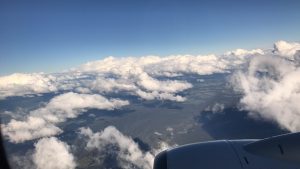 This upcoming week has some big shoes to fill after everything that I experienced last week! The bar is high and my expectations are even higher! I will be going on snorkeler’s tours (galore!) with ECOTREASURES and spending the weekend at home in Manly. Who knows, I might do surf school, have a beach day, explore some parts of Sydney that I have yet to see, go to Watson’s Bay, or do whatever else my heart desires! Until next time!